The bottom line: Using EBI, the probability of suffering a loss in a year is estimated at 7.8%. Details of the analysis are explained below.

As an initial measure of risk I estimated the probability distribution of the mean annual return obtained with EBI by resampling observations from the group of countries ranked first (the "Top 1" group). More specifically, a new sample was created by randomly ​replacing a country from the "Top 1" group by other country from the same group and for each new sample a mean annual return was calculated. This operation was repeated 50 thousand times. The distributions were estimated for the retrospective (assuming the "unlucky" scenario) and prospective samples separately. 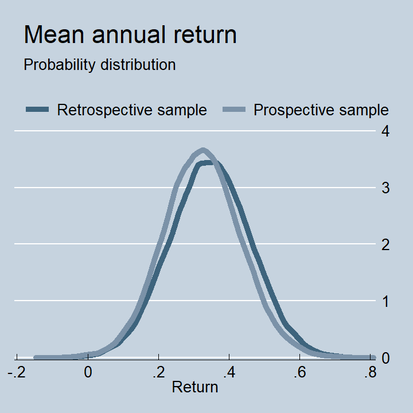 Annual return and probability of loss

A slightly different question refers to the range of the return that could be obtained in a year. Bootstrapping is used again to randomly select four quarterly returns from the retrospective and prospective periods separately, and these are used to generate annual returns.

The risk analysis will be updated as more data come out of the prospective phase.