After years of mediocre returns on my savings I started to explore evidence-based decisions rules for investing in international funds. Briefly explained, I collected the best public information that I could find and used it in econometric and statistical analysis to rank countries according to their likelihood of being “good” investment options in any given quarter. Rules were designed to maximize the return during a retrospective trial period ending on September 30, 2015. 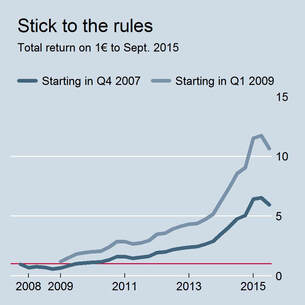 The figure shows the simulated total return on one euro invested in the country ranked first according to EBI rules over the retrospective phase. To perform the simulations two scenarios were considered. In an “unlucky” scenario the initial investment was assumed to be made in the fall of 2007. Stock markets around the world were at their peak, so buying at that moment was a bad idea. In a “lucky” situation the initial investment was assumed to be made after the 2008 financial crisis and when stock prices had bottomed out, i.e. in the first quarter of 2009.

By September 2015 the average annualized return obtained by EBI in the unlucky and lucky scenarios were 34% and 49%, respectively. Such rates are significantly larger than the ones observed in the stock market over long spells (i.e. several years).

​Bootstrap methods are used to assess risk. They show that in the unlucky scenario the 95% confidence interval for the mean annual return is 12%­­ ­- 57%.

​Admittedly, this is only a retrospective account of facts based on simulations. It shows the return that would had been obtained following a set of rules established ex-post. Only a prospective analysis where investment decisions are taken ex-ante can tell whether evidence-based rules work in practice or not.

Prospective decisions started on October 2015. The best countries or regions to invest according to EBI (out of 41 Morningstar categories) and those ranked last are presented below.